It is fantastic to see Disney marking another important milestone (Let’s not go into the debacle that was the 25th anniversary that nearly didn’t happen!) and with some very cool retro style merchandise. The Disney Park Blogs have given us a sneak peek :

“We loved the warm colors and illustrations found in [the Epcot Center book],” explained John Henselmeier. “In the past five years, we have designed many vintage Epcot items. For the 30th anniversary, we wanted something different – a retro but contemporary feeling, something we call ‘today’s vintage.’ That soft cover book really helped us achieve that look.” 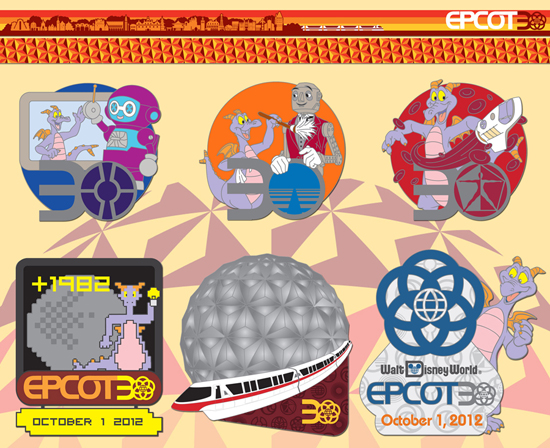 Work on the style guide began in December 2011 at the request of the Disney Pins team. Pins have been a big part of previous Epcot anniversaries and they will play a part in October. The image above contains a few of my favorites, including a reversible lanyard, a few mystery pins and a pin that looks like it’s from an early 1980s video game (oh, why can’t “Epcot Center – The Game” be real?!). John told me his favorite attraction of all time was Body Wars, so he made sure it was represented in the assortment.

There will also be a jumbo pin that uses the soft cover book image in the packaging. In addition to pins, look for a few softline items including a T-shirt that uses the “21st Century Continues” artwork as seen in the first image.