I love autumn in Florida. The extreme heat of summer subsides to slightly cooler temperatures while the parks are transformed into a wonderland bathed in orange. Fall also marks the start of some of my favorite events at Walt Disney World Resort like the Epcot International Food and Wine Festival and Mickey’s Not-So-Scary Halloween Party at Magic Kingdom Park. Coincidently, the latter now has an official fan page on Facebook, which means I’m not alone in my love for Halloween. While October 31 is still weeks away, we jump started the delightfully scary season by releasing new Halloween merchandise. This year’s assortment of Halloween goodies is based on a brand new artwork that is quickly becoming one of my favorites since I began working for Disney. I spoke with Cody Reynolds, Senior Character Artist with Disney Design Group, who was instrumental in bringing this Halloween treat to life. 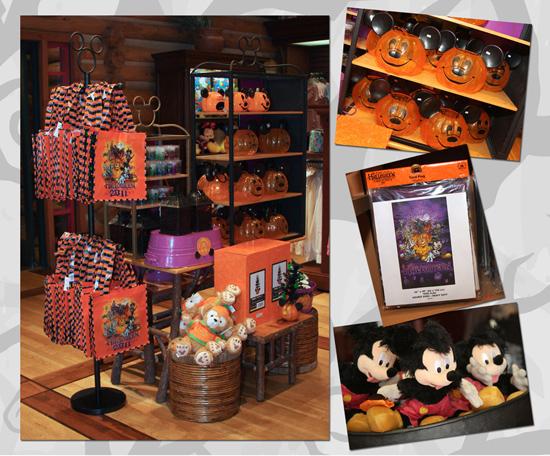 “For this year’s Halloween artwork, we added a playful edge to the Disney characters and overall design,” explained Cody. “Halloween has become such a fun holiday at Disney that we thought the artwork should reflect the same kind of fun that guests have when dressing up.”

Cody, who is responsible for creating seasonal artwork programs, began work on this year’s artwork in April 2010. He drew several different versions of the Fab Five characters (some were pretty extreme) before landing on the final designs pictured above. He explained that comic book illustrations were his inspiration. 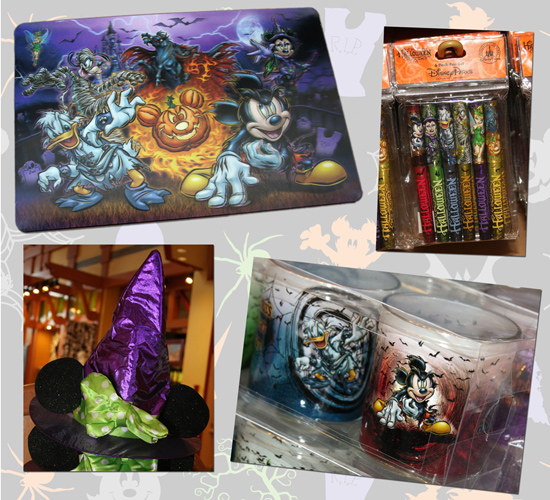 “I applied a comic book illustration style to the art to add a sense of drama,” continued Cody. “In comics, forced perspective, banded colors and dramatic poses are common themes. By using that style, the characters literally leap off the artwork.”

One of the best examples of this can be seen with Cody’s favorite Halloween item – the lenticular placemat. The artwork on the placemat has depth, and when moved, the characters appear to leap off the dinner table. 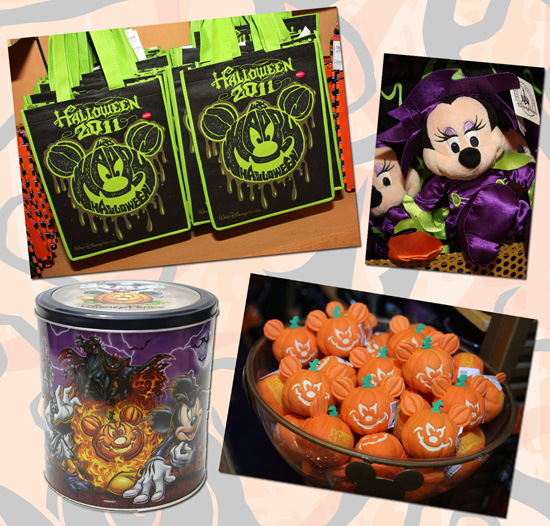 Cody enlisted the help of Darren Wilson, Graphic Designer with Disney Design Group, to create the “Halloween 2011” font used in the art (he also designed many of the softline items for Halloween this year). The font was designed to match the rips, frayed edges and tears seen in the Disney characters’ costumes. Darren was also responsible for creating one of my favorite items – the “Happy Halloween” pumpkin on the green, light-up bag (I didn’t see the words “Happy Halloween” at first glance).

I asked Cody about his favorite character in the artwork.

“I like the Headless Horseman,” smiled Cody. “He isn’t often seen on merchandise so I’m glad I included him. Plus, he is an important character at events like Mickey’s Not-So-Scary Halloween Party.”

Check out the popcorn tin to see the best application of the Headless Horseman graphic – the pumpkin looks like it is flying at me! Cody shared with me one final detail about this year’s artwork that stopped me in my tracks.

“The artwork will only be used this year,” said Cody. “I’ve been busily working on next year’s designs since about May.”

I guess with every treat there is a trick; I better stock up. The Halloween 2011 merchandise collection is currently available at a variety of locations at Disneyland and Walt Disney World Resorts. Happy Halloween!