With WDW’s 40th coming tomorrow, Disney decided to celebrate The Haunted Mansion’s 40th right along with it. Tonight is the ticketed Room For One More event at Disney’s Contemporary Resort and last night I was lucky enough to attend the free after hours Trick or Meet up at the Haunted Mansion. So I would like to share some photos with you. First up, from our good Vinylmation Release Party friends Johnna and Freddie. They are attending Room For One More and made it over the Contemporary to pick up their merchandise and got a sneak peak at some of the decorations: 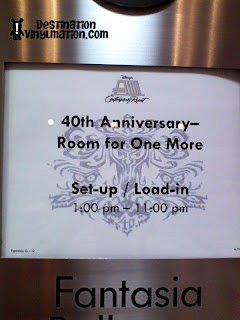 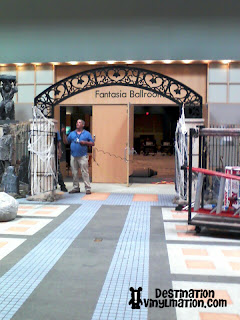 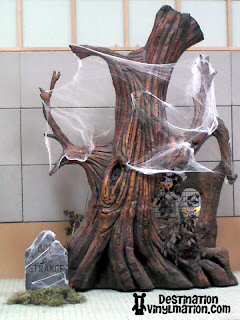 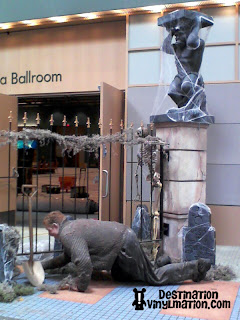 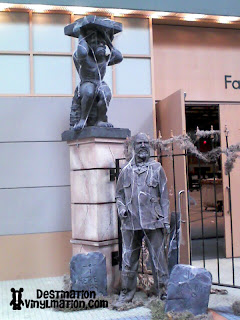 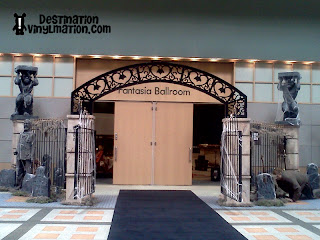 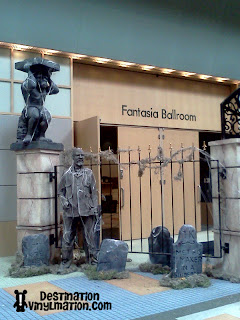 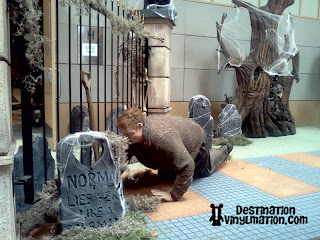 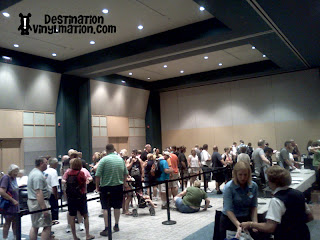 I am jealous. Hopefully they will give us a sneak peak inside the graveyard tonight! Next up, last night’s Haunted Mansion Meet Up. The Disney Park’s Blog hosted this free event. Last week they put up a Blog post and the first so many people to respond via email were invited to this special after hours meeting at the Mansion. Sorry for the bad iPhone pictures, my camera battery died. We should be able to update with some pics from the Disney Parks Blog soon. 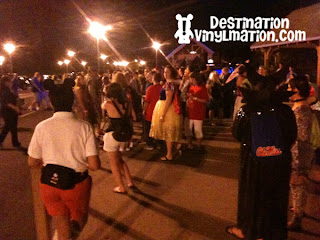 We meet up at Blizzard Beach, many in costume. A DJ was on hand to spin music and ask trivia questions for prizes. The prize? A WDW 40th anniversary Vinylmation. The open window versions you can buy in the stores. Shortly after 9pm, we were bused over to the Magic Kingdom. It was a tiny behind the scenes tour as we drove past the buildings housing some Christmas and ELP parade floats. We ended up behind Splash Mountain and entered the park through Frontierland. 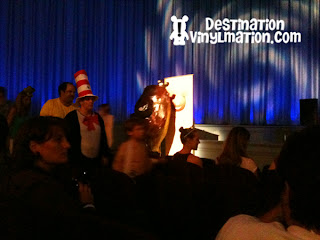 We were first guided into the Hall of Presidents theater where we were greeted by a guy in a Turkey Leg costume. 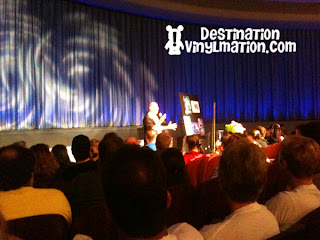 We then enjoyed a hilarious presentation by Disney Show Designer Jason Surrell. This guy, along with two of his Imagineer friends, gave an unforgettable presentation at May’s Destination D: WDW at 40 event. He was supposed to give us a history of the Haunted Mansion, but it quickly turned into a stand up comedy performance where he just fed off the audience and answered questions. With people recording the show on iPads, snapping pics on iPhones, and tweeting his every sentence, he made many jokes about it before saying that 10 feet behind him is Abraham Lincoln and the founding fathers saying “We fought the Civil War for this?” It was a great time. 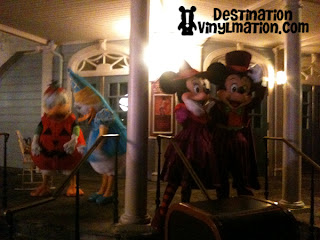 After the presentation, we were free to walk around the Liberty Square/Frontierland area. There were rice krispy treats and refreshments set up. And characters walking around. Mickey, Minnie, Donald, Daisy, Dr. Facillier (Princess and the Frog) and various ghosts from the Haunted Mansion interacted with guests. 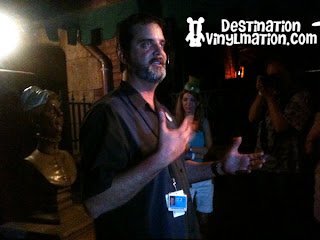 Of course the Haunted Mansion itself was open for rides. But the real treat was the tour of the new interactive queue by the Imagineers who built it. 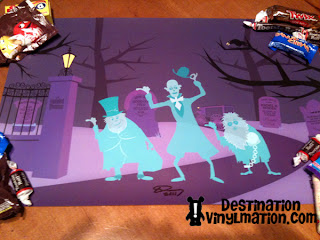 The Diamond Horseshoe was the site of an Imagineer meet and greet and select guests where treated to one of these posters signed by the artist. On the way out, all guests received an unsigned version of this same poster. Oh ya, and there was candy. Lots and lots of candy. Guests were given goodie bags that they could fill up at a few candy stations. 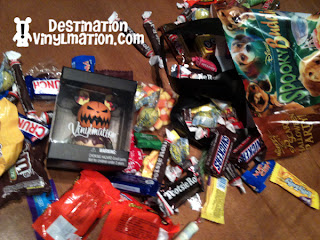 Hmmm, look at that. It wasn’t all candy. All guests also received a Nightmare Before Christmas Pumpkin King 3″ Vinylmation. Thank you Disney and the Disney Parks Blog for this great free event. It was similar to the one for the re-opening of Star Tours earlier in the year. I look forward to more of these wonderful guest interactions in the future.