If your starship can make the Kessel Run in less than 12 parsecs (I’m still trying to figure out how fast that is), set your hyperdrive for the Disney’s Hollywood Studios sector for May and early June, for the 2013 edition of Star Wars Weekends.

This year’s Force-filled fun will take place every Friday, Saturday and Sunday from May 17 – June 9, 2013. 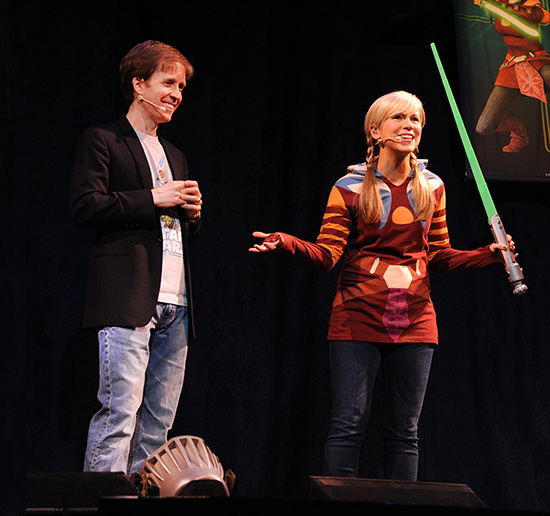 While details are still being planned, we’re excited to announce that James Arnold Taylor and Ashley Eckstein are returning as celebrity hosts for the annual special event. James, the voice behind many of the most famous animated characters in film, television and commercials, is known to Star Wars fans as the voice of Obi-Wan Kenobi on the Star Wars: The Clone Wars TV series. Ashley, who started her show business career as a parade dancer at Disney’s Hollywood Studios, is the voice of Anakin’s ambitious Padawan, Ahsoka Tano, on Star Wars: The Clone Wars.

Be sure to program your scanning droids to check here for the latest updates from the Galactic Senate about Star Wars Weekends 2013.

For guests who may be considering a visit to Walt Disney World Resort for their very first Star Wars Weekends, here’s a short overview video with our own galactic reporter, “Jedi John” (please note his very stylish “mic saber”). While the celebrity appearances for this year have not been announced (stay tuned for those names in an upcoming post), John talks to some Star Wars celebrities from past events to get their thoughts.