Storybook Circus Soft Opens for Guests at the Magic Kingdom

Yesterday was a big day for the Magic Kingdom! The first phase of the new Storybook Circus area of Fantasyland“soft” opened to guests including: 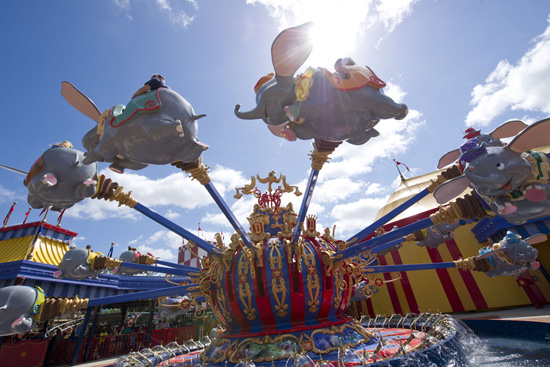 “The Storybook Circus area pays tribute to the traveling circuses of the 1950s and 1960s – the setting for Walt Disney’s Dumbo – and we’ve put a lot of signature Imagineer details into every nook and cranny” said Chris Beatty, Creative Director, Fantasyland Expansion for Walt Disney Imagineering.

Dumbo, one of the circus’ most famed acts, flies guests around the Big Top area – featuring shiny new red and gold colors (inspired by ‘50s- and ‘60s-era tin toys), newly-created signature illustrations from one of the animators of Disney’s “The Little Mermaid,” and a beautiful new water feature circling the base of the attraction – a first for the Magic Kingdom Park attraction.

“We were truly honored to be asked to design the new Dumbo,” Beatty said. “Every time a new piece of it came in, it would get us excited all over again.”

The Storybook Circus has just set up shop and peanuts, hoof and paw prints can be seen in the walkways – remnants of the circus animals and guests milling about the area.

The Great Goofini, the circus’ stuntman, presents for guests one of his most daring stunts – The Barnstormer – which features an amazing array of aerial acrobatics. Some of the Great Goofini’s other stunts can be seen in posters around the circus area including “Bear Wrasslin” and “Aquamaniac.” The stunts and posters are a tip of the hat to some of the great Goofy short subjects of the ‘50s and ‘60s.

And the Fantasyland Train Station design pays homage to both the elegant train travel of America’s past and Disney history, complete with a Casey-Junior-inspired weather vane and Carolwood Park sign, with “Fair Weather Place,” a nod to “Fair Weather Route,” Walt’s tag line for the Carolwood Pacific Railroad, the steam engine Walt Disney had running through his backyard.

The attractions are in what we, in the biz, call “soft opening,” which means that they will be open at certain times and not at others.

This is just the first phase in what will become the largest expansion in Magic Kingdom Park history – nearly doubling the size of Fantasyland.

Stay tuned to the Disney Parks Blog for updates!