Who WIll You Be Meeting on Star Tours: The Adventures Continue?

One of our goals for the new Star Tours show was to pack as much Star Wars into the attraction as possible. That meant traveling to different planets, and meeting up with classic characters from the saga.

Of course you already know that R2-D2 and C-3PO are back, reprising their roles in the pre-show, and taking on bigger roles (especially C-3PO) in our Starspeeder adventures. And some time ago, we introduced you to two new droids in our show…Star Tours Pilot Ace (AC-38) and Spokesbot Aly San San.

So who else is joining the cast? 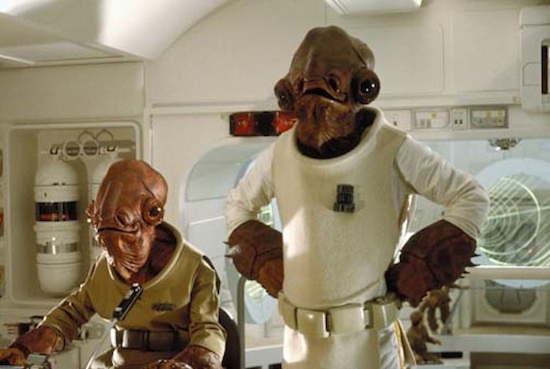 Well, it wouldn’t be a Star Wars adventure without Darth Vader. The Dark Lord of the Sith will be accompanied by legions of stormtroopers and some new “skytroopers,” designed especially for our show. Boba Fett, everyone’s favorite bounty hunter, also will be after us, as well as an assortment of nasty droids and creatures.

Balancing out the villains are some classic good guys – and even a princess! Master Yoda, Admiral Ackbar (pictured above in a still image from Star Wars: Episode VI Return of the Jedi) and Princess Leia will appear in the show to help guide our adventures. We may even run into Chewbacca along the way!

Source: Text and Images from the Disney Parks Blog