Today, we are unveiling some spectacular new images by acclaimed photographer Annie Leibovitz, who continues to lend her vision to the successful Disney Dream Portrait series we began just more than four years ago. Each portrait features well-known celebrities transformed into the role of famous Disney characters.

The three latest Disney Dream Portraits are the first new images in the series since 2009, and for the first time we’ve included a couple of the most wicked Disney villains ever!

I told you yesterday we were getting ready for something wild. I suppose you now know I actually meant “something Wilde!” There were so many great comments posted here on the Disney Parks Blog, Facebook and Twitter yesterday – congratulations to Alyssa and Shari for being among the first to correctly identify our celebrity, and what she is doing!

As the Evil Queen, Olivia Wilde joins Alec Baldwin as the spirit of the magic mirror from “Snow White and the Seven Dwarfs.” In the dark depths of her lair, the Queen has summoned the mirror’s spirit through wind and darkness to reveal the identity of a lovelier maid than she. The caption reads, “Where magic speaks, even when you’re not the fairest of them all.” 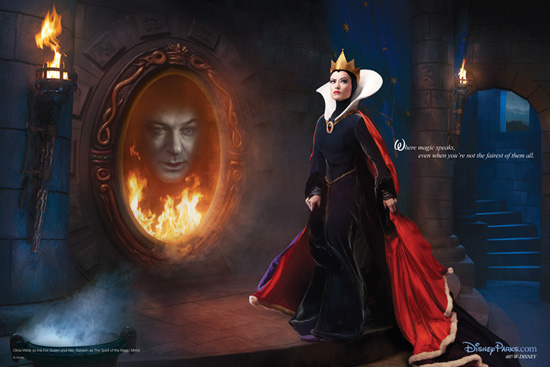 Penelope Cruz and Jeff Bridges appear as Belle and the transformed prince, recalling the final scene from “Beauty and the Beast.” The celebratory moment is captioned, “Where a moment of beauty lasts forever.” 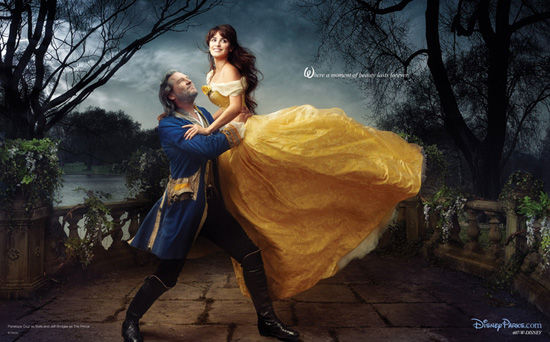 Finally, coming ashore as Ursula from “The Little Mermaid” is none other than Queen Latifah. The caption reads, “Where memories take hold and never let go.” 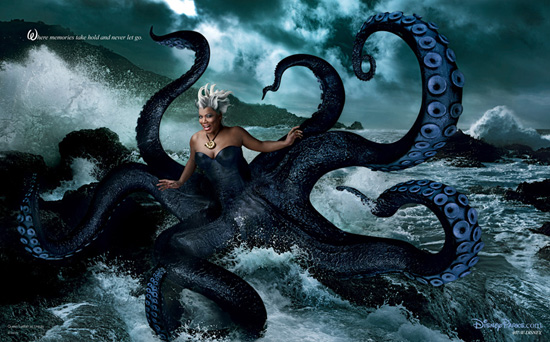 So, here’s a difficult question: do you have a favorite? I’m sorry to have to ask, but, “life’s full of tough choices… innit?”

You can find these stunning images and more as part of a special insert in the April issues of O – The Oprah Magazine, People En Español, Real Simple, Essence, and InStyle as well as the March 28 issue of People.

Next week, I’ll take you behind the scenes of some of these amazing photo shoots and you’ll have a chance to see just how Annie creates these inspired images of Disney fantasy come to life.