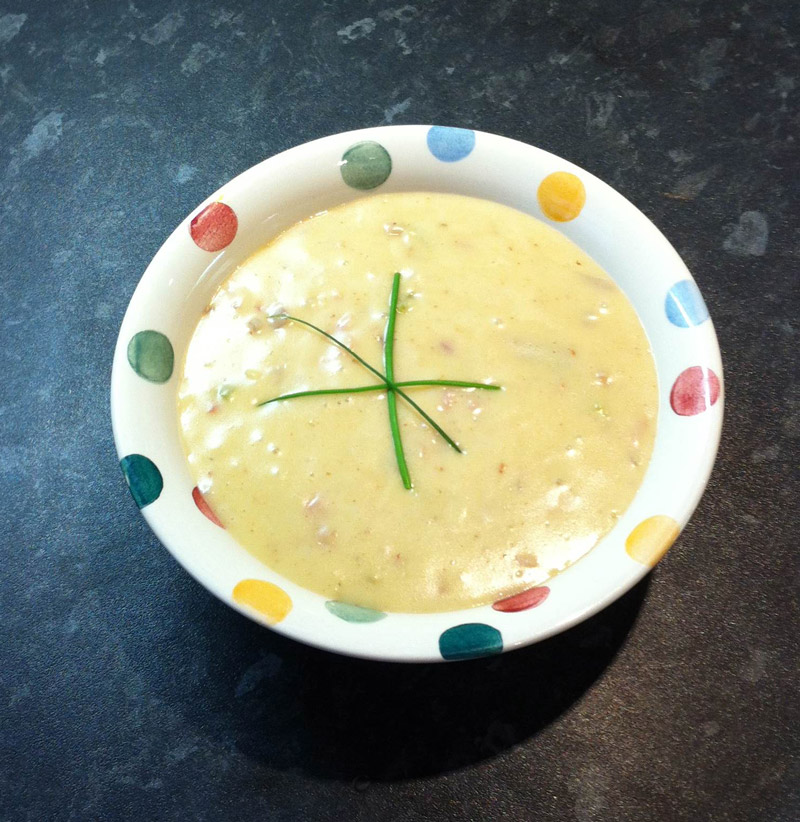 Le Cellier at Epcot is famous for it’s Cheddar Cheese Soup. It is one of those dishes where you either love it or hate it. I guess it’s down to whether or not you like cheese too.

At our Disney Brit Regional Studios we decided to try out the recipe and share our own attempts and feedback.

The recipe that we used was

1.  Warm milk in a small pan.
2. Brown the bacon in a large saucepan, then render until crisp. Remove some bacon if required for a garnish.
3. Add the butter and melt.
4. Add celery and onions, cook on a medium to low heat until translucent.
5. Add flour and mix thoroughly to form a roux. This will turn very dry and thick.
6. Turn up heat and add chicken stock and simmer for three minutes.
7. Add warm milk and stir vigorously as it thickens.
8. Cook out roux until thickened.
9. Reduce heat to low, add cheese, and stir until melted.
10. Season with salt, pepper, Tabasco, and Worcestershire sauce.
11. Just prior to serving, add ale.
12. Garnish with cooked bacon and fresh chives.

“My cheddar cheese soup was delicious. Although my entire family decided before trying it, that it was disgusting. Admittedly my wife isn’t a big cheese fan. My daughters (2 and 5) are fickle.

The recipe that we used cooks (in my opinion  enough for 10 – 12 bowls. As a result I ended up eating it for lunch at work 3 days in a row. It does microwave as long as you stop and stir often ie every minute. I cut up the bacon as small as I could, but found that when you cook it dry in the pan it breaks up smaller, which I felt was good for the soup.

Next time I don’t think I’ll buy any chives as they were excessive to not use.”