Continuing our look behind the scenes of the latest Disney Dream Portraits by Annie Leibovitz, today we are off to Never Land!

Well, actually, we’re off to Disney’s Golden Oak Ranch near Newhall, Calif. The ranch has been the site of many Disney productions through the years, including “The Adventures of Spin and Marty,” “Old Yeller,” “The Shaggy Dog” and even the Pirates of the Caribbean films, so it felt very familiar to this Disney fan.

On the beautiful November afternoon that I arrived at the ranch, “Tick-Tock” was already in place, ready to work…and eat. Russell Brand was in wardrobe and the amazing Leibovitz Studio team was hard at work attending to every detail.

Playing in the background, “Yo-Ho (A Pirate’s Life For Me)” and never “Never Smile at a Crocodile” helped set the mood as Russell took his place in the jaws of the crocodile and the shoot began. As it continued, some wardrobe adjustments were made, Captain Hook’s hat was included for a while, the jacket was removed, then added back. Taking photos of every possible combination helps keep all options open as the final image is being created back in New York.

If you’re wondering how Russell got out to the crocodile without getting wet, you might not be surprised to learn that he actually walked a wooden plank that could be easily removed while Annie was shooting. 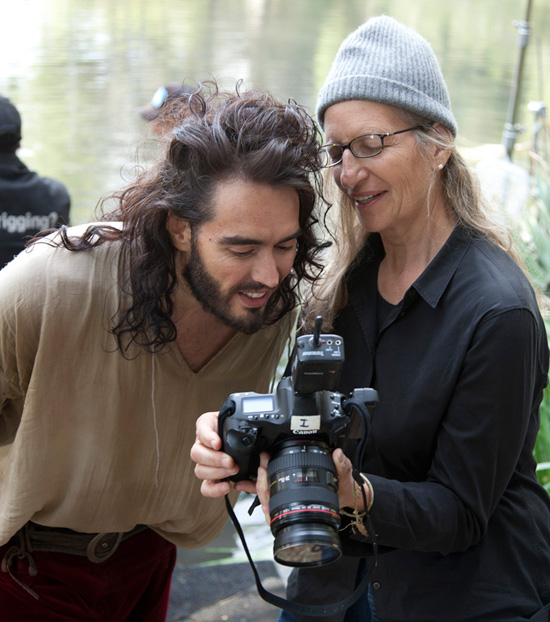 In this video, you’ll get a glimpse of how the portrait was shot and learn what Russell told me he has in common with Captain Hook – and it’s obviously not a fear of crocodiles.