Disney have just released some news about changes to the Florida Project Vinylmation. Originally, the Hula girl figure was to be included but has now been swapped out for a new Dumbo figure. 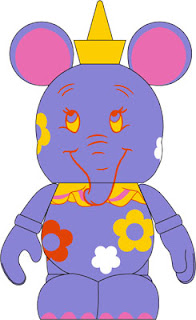 This Dumbo will be packaged with Retro Mickey 9″. Here is the quote from Steven Miller at Disney:

“We unfortunately had to make a change to the 3-inch figure. The Hula Girl inspired figure was replaced with a rather colorful Dumbo. We asked Donald Ferro, developer for Vinylmation, about the change. Basically, he said that when the sample of the 3-inch figure arrived today, he did not like how the art was applied to the figure.”